Boston Orthotics & Prosthetics has extensive experience in the management of deformational plagiocephaly through our clinical network, and is bringing progressive designs and techniques forward to advance the treatment options for this pediatric population.

Boston O&P is the only company that offers several options for both the prevention and treatment of plagiocephaly, including products designed to avoid plagiocephaly and an affordable helmet solution that achieves results quickly and effectively when plagiocephaly has already occurred.

Head shape is commonly described using terms of Latin origin. The four shapes described below are the most common abnormal head shapes a pediatrician will see. These four abnormal head shapes can be caused by either mechanical cranial deformation or by craniosynostosis, a condition caused by premature closure of a cranial suture (growth plate). Craniosynostosis is rare, and needs to be diagnosed and followed by a specialist. 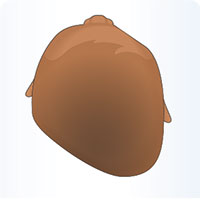 The term plagiocephaly describes an  “oblique”head. This can be predominantly anterior (forehead flattening) or posterior (parietal  flattening). Posterior deformational plagiocephaly is the most common abnormal head shape a pediatrician will see. Flattening is accompanied by anterior displacement of the ear on the same side as the flattening forehead, and in severe cases, the orbit and cheek. When the ear on the opposite side of the flattening is further forward, a specialist should be sought to rule out synostosis. 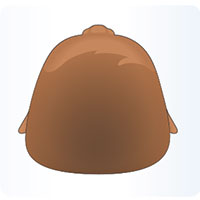 Brachycephaly describes a short, wide head. The occiput flattens and there is bilateral widening in the temporo-parietal regions. In deformational brachycephaly, there is often bulging above the ears. 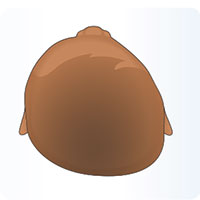 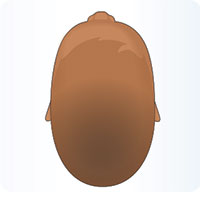 Scaphocephaly (also known as “dolichocephaly”) is characterized by flattening of the sides of the head and elongation from anterior to posterior. Deformational scaphocephaly is most often seen in premature infants.

Understanding risk factors for deformational plagiocephaly is essential for prevention, diagnosis, and treatment. While there are many ways infants can develop cranial asymmetries, the common denominator is that growth is restricted in a fixed area of the head. While supine sleeping is often blamed for causing cranial deformation, multiple risk factors are usually present in infants with plagiocephaly.

Some Causes of Cranial Asymmetry

In cases that are identified very early on or when the child is predisposed to have positional cranial flattening (premature birth, multiple birth, in NICU for a period of time at/after birth), Boston Orthotics & Prosthetics advocates repositioning techniques including: 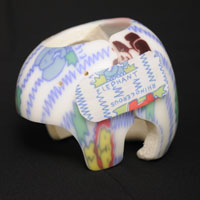 Why then have some pediatricians been reluctant to use this treatment? Well, some forms of synostosis (premature closure of the cranial sutures) can appearance to be plagiocephaly, such as: 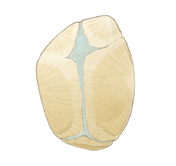 In this example. the left coronal suture is prematurely fused and therefore no more growth can occur from this suture line. This shows a slightly posterior plagiocephaly on the left side however in true positional plagiocephaly you would also see a left anterior bossing (pushing forward all on the same side). In this case, the anterior bossing in only on the child's right side. This is fairly obvious and indicates something other than positional deformity. Reports vary, but this is thought to be seen in only one in 3,500 live births. 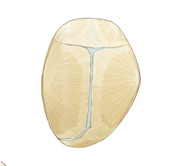 In this example, the right lambdoidal suture prematurely fuses. You see the posterior flattening that would seem to indicate right plagiocephaly, however upon further review you notice a couple things conflicting with that diagnosis: 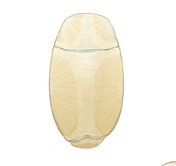 Sagittal synostosis (shown) and metopic synostosis are also potential forms of synostosis, however obviously do not in any way mimic deformational plagiocephaly. They are the most common forms of prematurely closed cranial sutures, occurring in one in 2,000 live births and one in 2,500-3,500 live births respectively.

Please understand that we are in no way discouraging use of specialists, however we are saying that in many cases, a pediatrician with proper training can make the diagnosis of positional cranial deformity versus synostosis and refer the patient directly to an orthotist if a cranial remolding orthosis is warranted. This process obviously saves time and money. If there is any doubt whatsoever or co-morbidities present, please contact a specialist immediately.