After Near-Paralysis, 1-Year-Old Charlie is Ready to Walk

Lying on the living room floor of the Landvatter home in Amherst, New Hampshire, three-year-old Noah turns to his baby brother Charlie. “I’m going to tell you a story,” he says. Unable to move his arms and in a brace to keep his spine in place, Charlie listens. 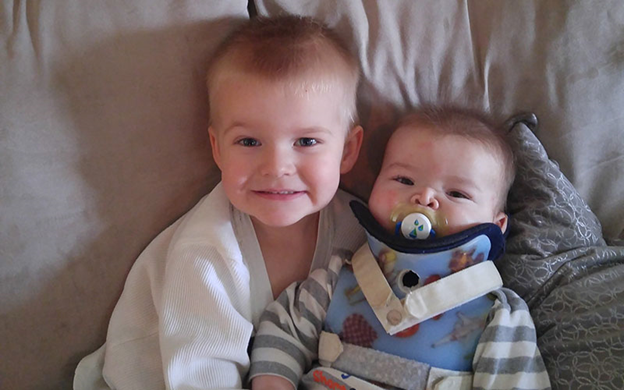 "Noah knew Charlie was delicate,” explains his mom Karen. “He knew he needed extra help.”Karen Landvatter was 20 weeks pregnant with Charlie, her fourth child, when she learned he might not survive. “We were told he was missing parts of his brain and had all sorts of problems with his spine,” she says.

But the day of delivery arrived with unexpected results. Miraculously, the parts of Charlie’s brain that were apparently missing were there, and although he had severe spinal stenosis—a narrowing of the spine that puts pressure on your spinal cord—he was off oxygen and breathing on his own.

Two weeks later — because of the complexity of his condition — the local hospital near the Landvatters home transferred Charlie to Boston Children’s Hospital, where he was diagnosed with chondrodysplasia punctata 1, X-linked recessive (CDPX1). CDPX1 is an extremely rare disorder, exclusive to males, which affects bone and cartilage development. Only a handful of documented cases have been reported.

The diagnosis explained why Charlie was having difficulty with his breathing, eating and — more specifically — his spine. But nevertheless, the Landvatters were able to bring him home for the first time.

“From the get go, Charlie wasn't a normal baby,” Karen says. “He needed a G-tube [gastrostomy tube] to deliver nutrition. He slept 19 hours a day. He was just kind of there. And I began to notice that although he could move his hands and move his legs, he couldn’t move his arms.”

At first, Charlie’s neuro and orthopedic surgeons thought his spinal stenosis had worsened. But following a new MRI, they discovered his worsening paralysis was caused by instability of the skull and upper cervical spine. Charlie’s skull was sliding forward and pinching his spinal cord, preventing his arms from moving.

Under these circumstances, the doctors would typically perform a procedure to hold the skull in place relative to the spine by attaching rods to the upper cervical spinal column, which is then screwed to a plate at the base of the skull. But Charlie was only 2 and a half months old and too small to stabilize with rods. His doctors at Boston Children’s had to wait until Charlie was older to safely perform surgery.

To avoid permanent paralysis, Charlie would need to wear a brace. Apart from bathing, he would have to have it on every minute of every day. 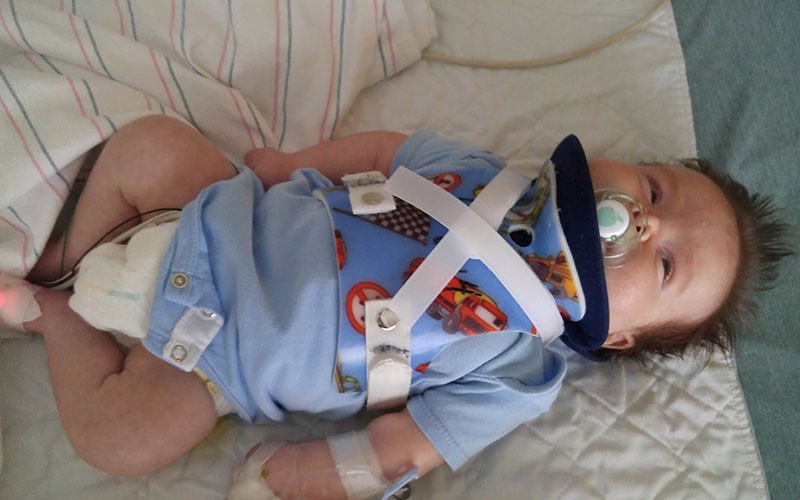 Rusty Miller, Vice President and Clinical Director of Boston Orthotics & Prosthetics, arrived to fit Charlie for a brace — for safety reasons he couldn't leave the hospital without it.

“Essentially, we needed to push backward on Charlie's throat and hold the back of his skull and upper back/shoulder area to move his C spine, so that it was straight from the sagittal (side) view,” says Miller. “It’s not easy for a baby and even more difficult on the parents, but Karen knew we had Charlie’s best interest."

A scan mold was produced and modified, and Miller went to work so he could begin lining up Charlie’s C-spine.

“We were told it would probably take a month to make the brace, but Rusty was excellent,” says Karen. “He actually got it done within days.”

Before heading home from the hospital, Karen asked if Charlie would ever be able to move his arms.

“We were told he might not ever be able to move them,’” recalls Karen. “And, there was a good chance Charlie would eventually not be able to breathe on his own. All I could think was, if he's there mentally, I don't want him trapped in his poor body.”

The Landvatters adjusted to life at home with Charlie as best they could. Charlie grew accustomed to the hard shell that wrapped around his front, from underneath his chin to right below his rib cage. “It was hard to hug him,” she says. 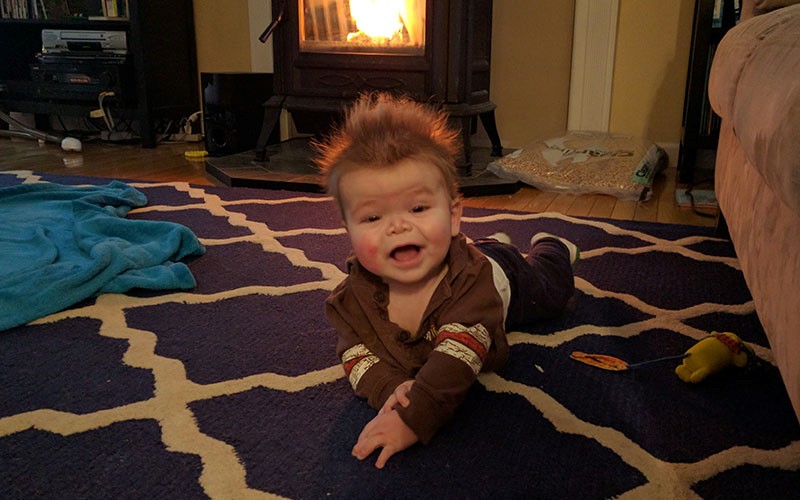 Gradually, Charlie started using his right arm — and then his left. And, at three months of age, the doctors told Karen he might not need surgery after all.

As Charlie grew, he was fitted regularly for new braces. Miller worked thoughtfully, carefully, collaborating closely with the orthopedic surgeon at Boston Children’s to make certain he had all the right measurements.

“Anytime I had an appointment at Boston Children’s, I would schedule one with Boston O&P, so any necessary changes could be made,” Karen says. “Rusty did a fantastic job. He knew exactly what was needed.”

Charlie improved rapidly, and Miller made adjustments to accommodate him by opening up the brace around his shoulders.

“When he first started moving his arms we thought, this is an absolute miracle. Without the brace, he would probably be paralyzed.” 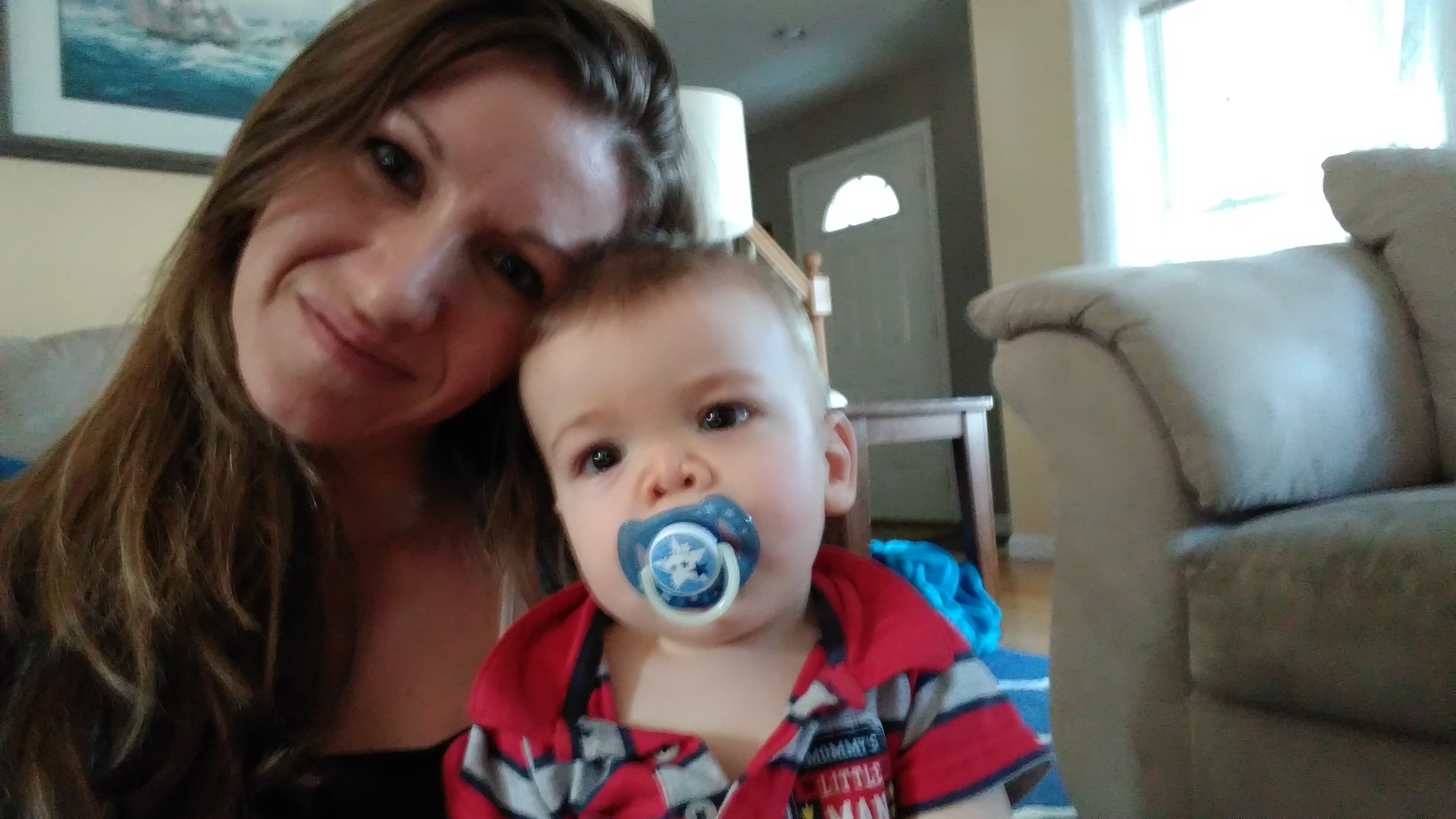 Now, at 14 months old, Charlie doesn’t need the brace anymore — only for extra protection when he’s in the car. The spinal stenosis is improving. He’s still receives nutrition through a G-tube, but the Landvatters are hopeful, that eventually, he will be able to eat on his own.

“Considering he couldn’t move his arms the first 6 months of life, and now he’s close to crawling and taking first steps, it’s just amazing. We don't know how things are going to turn out, because the story isn't over yet, but it certainly seems like we are headed in the right direction.”