For Daryl Fornuff, CO, Orthotics & Prosthetics is a Family Affair

Daryl Fornuff is a Certified Orthotist and the Clinic Director of the Boston Orthotics & Prosthetics clinics in Mountainside and Belleville, NJ. While Daryl himself has more than 20 years of experience in orthotics and prosthetics, his connection to the field goes back even further—to his late father, Donald Fornuff, whose career in orthotics and prosthetics spanned more than 30 years.

Here, Daryl tells the story of how his dad, Donald Fornuff, got into the field of orthotics and prosthetics, and how he ended up following in his footsteps:

My dad grew up in the Bronx. His father (my grandfather) was a superintendent for the apartment building we lived in. One day, my grandfather was out in a fishing boat on Long Island Sound and his boat overturned. It was a cold November day, and he had a lot of clothes on, which weighed him down.  He tried to swim to shore but didn’t make it.

My dad was the youngest of four brothers. The older ones were already in the military so when their dad died, he had to go to work to help the family.

Starting a Career as an Orthotist

My dad had a girlfriend whose mother worked in an O&P office, so he got a job there sewing leather belts to hold orthotics onto patients. From there he worked his way up. Back then you didn’t go to school for it. My dad was a mechanically inclined person—building things and fixing things came naturally to him. Helping other people out was a bonus. 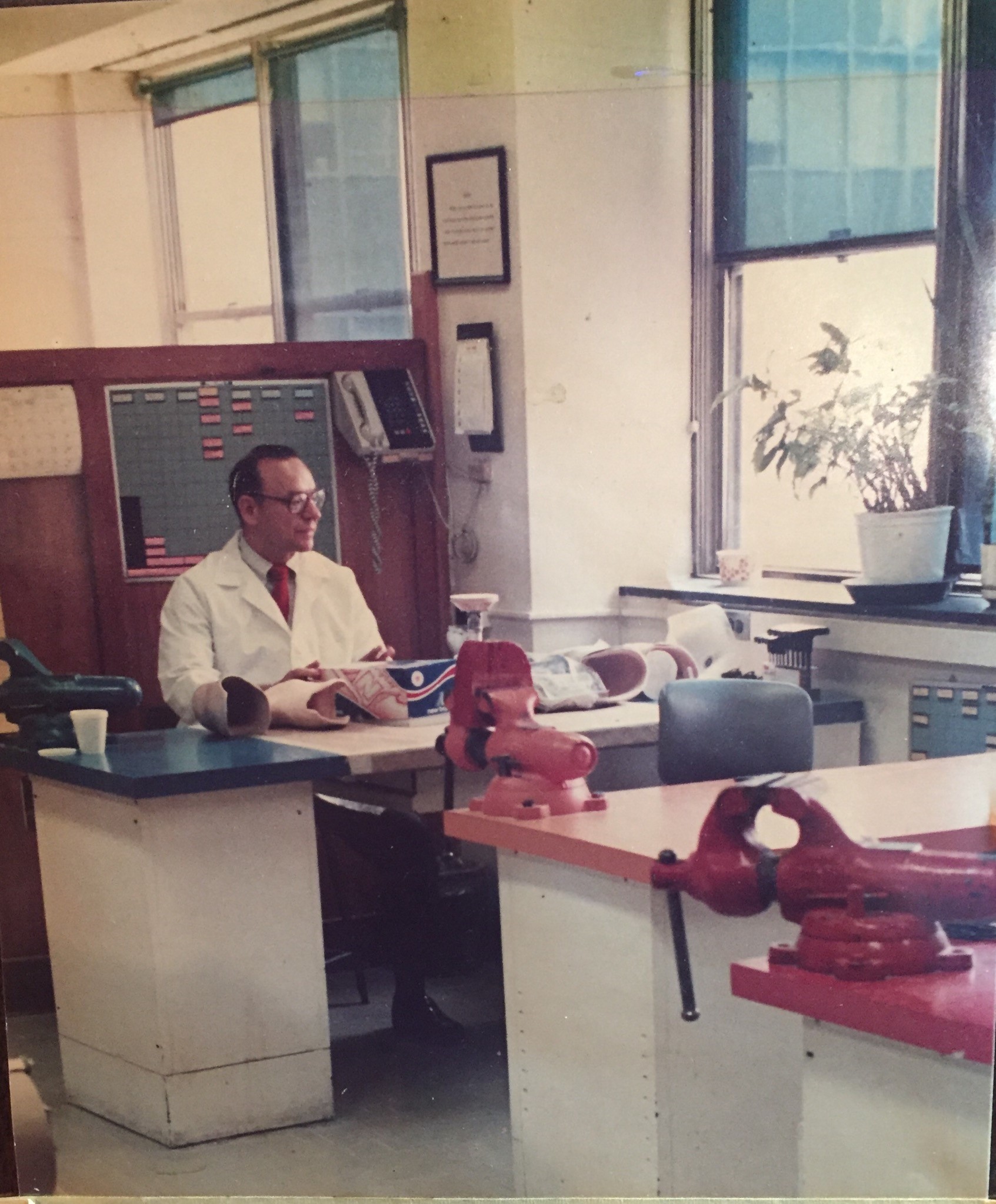 After he became a CPO, my dad worked at NYU’s Institute for Rehabilitation Medicine [now the Rusk Institute of Rehabilitation Medicine at NYU Langone Medical Center] from 1968-1988, where, among other things, he made high-end upper prosthetics for injured Israeli soldiers using the most advanced technology and the finest materials and components available at the time. In addition, he worked with Rick Allen, the drummer from Def Leppard, when he lost his arm.

He was also part of a group at NYU that helped design a specific type of brace called a spiral ankle-foot orthosis (AFO). It has been improved upon since then but versions of it are still being used. 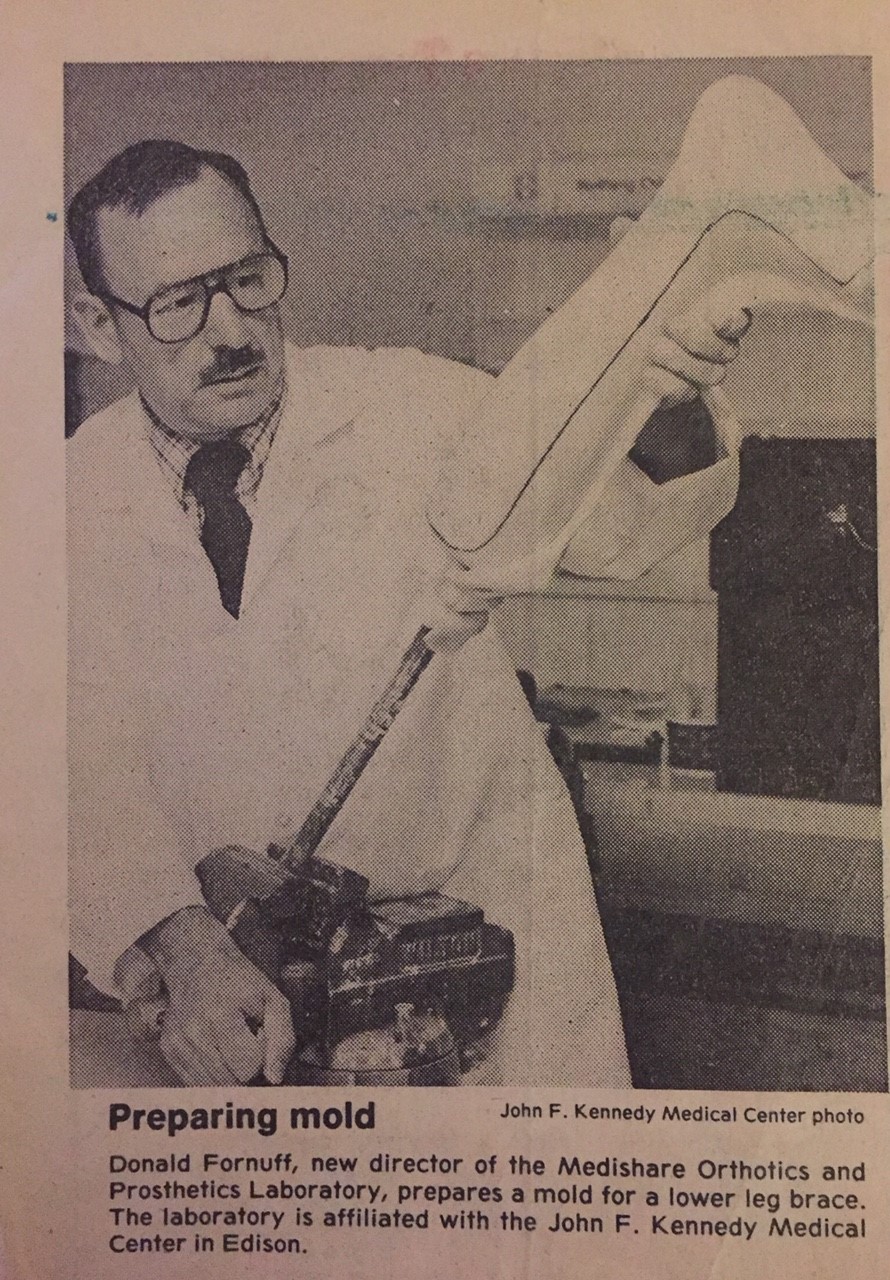 My dad used to take me to work with him at NYU. One of the guys who now works for Boston O&P, Roger Chin, actually worked with my dad. I remember seeing him building a leg.

Back then, when people would come in to get fit for braces, if my dad had a relationship with them he would take the patient right back to the lab and they could watch while my dad was making adjustments to their braces. That’s one thing that stood out to me.

In 1989 my dad went to work as a prosthetist at Medishare, a new company that opened in Edison, NJ. From 1990-1998 he worked for Kessler Associates, a subsidiary of Kessler Institute for Rehabilitation in NJ, which had high-profile patients such as actor Christopher Reeve and Eric LeGrand, a Rutgers football player who was paralyzed after a tackle.

Following in Dad’s Footsteps (and Mom’s)

When it was time for me to think about a career I didn’t automatically think of the O&P field, but my dad suggested I try it out. I had always wanted to be a police officer or a firefighter, but I was mechanically inclined as well so it was a natural fit.

Mom opened her own OT consulting group in 1978, and later worked at the Early Childhood Learning Center of NJ and helped developed RAPP (Responsible Adult Pride Program) in a school for physically and mentally challenged children.

One thing that stood out in her career is that she was always inspired and challenged to help patients become independent again. My aunt, my mom’s sister, lives in Nebraska and is also an OT. She married a recreational therapist who takes patients to play baseball and basketball as part of their treatment.

My dad was on the cutting edge of orthotics and prosthetics in his day, but there have been so many changes since then. The biggest change is technology. Back then everything was done with plaster casts and molds; now we’re using very lightweight carbon fiber materials that are used to make fighter jets and race cars. It has definitely progressed in terms of material and technology. I remember telling him how many people we were able to fit with braces in one day and he replied, “that’s not possible.”

A Legacy of Care

Since I live local to where I work, I see some of my patients out and about in town and in neighboring towns. I see them at the pool, the deli, the bagel shop, and even at the school where my kids go. It’s great to see them out in the community with their families just as I am with my family.

I am very fortunate to have been guided and supported by my parents, into such a fulfilling career. To me, the meaning of life is to have fun and serve others. I am able to accomplish that every day I go to work at Boston O&P. And that feels great.