His Happiness Makes Everything Easier

Gavin Wells sidles up to his sister on the couch, “Oh, baby sister, so cute. Hold hands.” He loves to cuddle with her, says his mom Brigid, “But then, if you put her in his lap, he says, ‘So big.’”

At 27-inches tall and just under 20 pounds, 3-year-old Gavin is almost the same size as his 7-month-old sister Ananda.

That’s because he was born with a rare form of dwarfism called diastrophic dysplasia, a condition that causes bone deformities and joint pain. This means Gavin’s arms and legs are short in stature, while scoliosis has caused a severe curve in his back. In addition, he was born with bilateral clubfeet.

Brigid and her husband Cory discovered Gavin had dwarfism during their 18-week ultrasound, “I was afraid he might not survive, because there are some types of dwarfism that aren't compatible with life,” Brigid says.

The Wellses had genetic testing and learned they both carried a recessive gene, which gives their children a 25-percent chance of getting diastrophic dysplasia.

On April 21, 2015, 29 weeks and a day into Brigid’s pregnancy, Gavin was born, weighing in at two and a half pounds and measuring 12 inches. He spent 86 days in the NICU before the Wellses were able to bring him back to their home in Amesbury, Massachusetts.

“Gavin is in a small bracket of little people, and has a variety of orthopedic issues that go along with it,” Brigid says.

“When he was out of the cast, he started going to the brace shop and was fitted for his first little pair of ankle foot orthotics (AFOs) for his clubfeet when he was a year and a half,” Brigid says. “He's had two pairs of braces for his feet, and he’s in his second back brace now.” 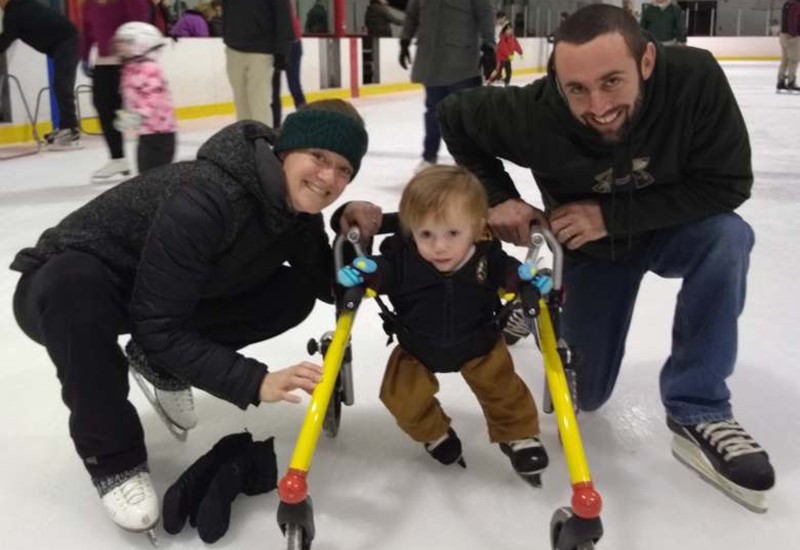 Support and independence in the form of a brace

Before the back brace, Brigid says Gavin couldn't sit up without support. “After we got the brace I noticed he was a little more confident. I don't know if he felt safer or if it just gave him enough support he was able to start sitting on his own.”

Having a brace that goes from the chin to the hip may in some respects restrict movement, but according to his mom, Gavin is getting around just fine. Plus, it doesn’t hurt that his brace has jungle animals on it. And, along with a posterior walker, he’s happy to show off his walking skills in a video that was shared with orthotist James "Rusty" Miller, Boston O&P Vice President and Clinical Director, who has watched Gavin grow and change.

Adds Rusty, "Gavin may have a rare condition, but we’ve grown accustomed to finding solutions for complex problems while working with Boston Children’s Hospital. We are always going to try to develop a solution to improve a child's well being, even if the problem is a challenging one and there is no obvious solution."

It's taken a long time for the Wells family to see a progression in Gavin and to get used to the unexpected. But now that he’s walking with the help of his walker and finally talking, Brigid worries less.

“In the very beginning, Gavin was scared and would cry when we went to the hospital. But now, he seems fine with doctors. He even takes his toy cars and says, ‘I’m headed to the brace shop.’”

The brace has kept Gavin from needing an additional surgery. The goal is to get him walking short distances. As far as his back, Brigid says he will likely need growing rods for his thoracic spine, but he's still too small for that sort of surgery. Right now, the Wellses have been told to stay the course with the brace. “Rusty has agreed that being in the brace is the least invasive and best option,” Brigid says.

In the meantime, Brigid tries not to think too far into the future. “Sometimes I have to say, ‘OK, we are in the brace, and that is better than a back surgery.’”

She says that's one of the lessons Gavin has taught them—being present in the moment.

“His happiness makes everything a lot easier. Even in school, he doesn't seem to notice or mind that he’s in a walker, and the other kids are running. I think that day might come, but right now, he is a blissful little man.” 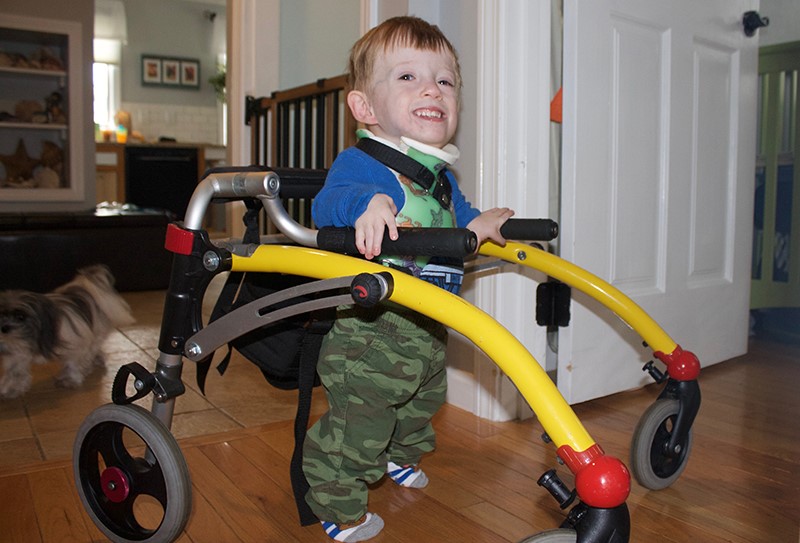