If you know a child or teen with idiopathic scoliosis, you may have heard that wearing a brace does not correct a spinal curve, it merely stops the curve from getting worse.

The new Boston Brace 3D from Boston Orthotics & Prosthetics uses an improved brace design with a unique shift/push combination of forces that move the spine into a corrected position. That means the right scoliosis brace, worn for the prescribed amount of time, may actually improve a spinal curve in children and teens. 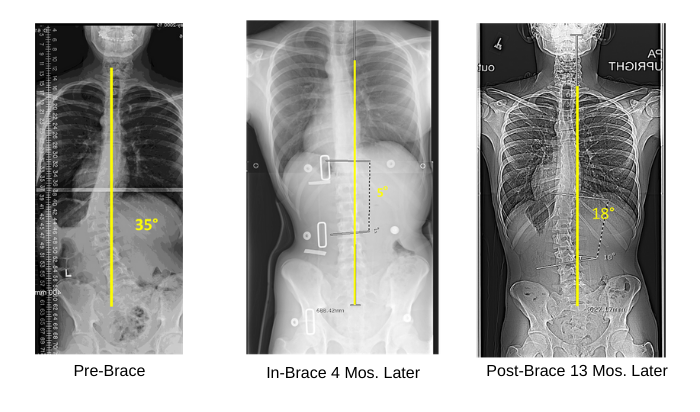 Boston O&P measures curve-correction outcomes by taking an X-ray of the spinal curve before bracing begins and comparing it with an in-brace X-ray (i.e., when the patient is wearing their brace).

The goal is to see at least a 50% reduction in the curve between the pre-brace and the in-brace X-ray. For example, if the patient’s initial Cobb Value is 30, an in-brace X-ray ideally would show the Cobb Value at 15. That said, there are many factors that influence the amount of correction. Some curves see between 50% and 100% in-brace correction while other more complicated curves may see around 30% to 50%. The goal is to obtain correction without compromising the patient’s ability to wear the brace.

The final measurement showing the correction of the scoliosis curve is taken with a post out-of-brace X-ray (i.e., when the patient is not wearing the brace), usually after the bracing is complete.

The amount of spinal curve correction that can be achieved with bracing in pediatric scoliosis cases depends on a number of factors, including the type of curve and where it is located on the spine.

Thoracolumbar curves, which are located in the lower thoracic (mid-back) and upper lumbar (lower back), typically see the highest level of correction, followed by curves that occur exclusively in the thoracic and lumbar regions. Bracing is also more successful with small, single curves—it’s more difficult for bracing to achieve the 50% curve reduction goal when the curve is larger or more complex. 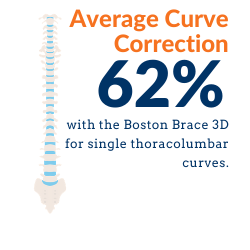 In a study of bracing results for adolescent idiopathic scoliosis using the Boston Brace, 39% of patients had a spinal correction of 5 degrees or more, at least a year after completing bracing treatment.

It’s important to note that treatment with the Boston Brace, or any scoliosis brace, will not eliminate a spinal curve in children or teens with scoliosis. The goal of bracing is, at the minimum, to prevent the curve from getting worse when the patient is still growing, and hopefully keep the spinal curve small enough that the patient can avoid surgery. The combination of in-brace curve reduction and adherence to the prescribed wear schedule has been shown in multiple studies to reduce the risk of curve progression.

In some cases, the curve can actually be improved with bracing, but that depends on a number of factors, including the type and degree of curve, age at diagnosis, the level of compliance with the wear schedule, and how the body of each individual patient responds to bracing as a treatment for scoliosis.

“Just a few years ago, we were happy when we stopped the curve from increasing, but with our new Boston Brace 3D, we’re almost expecting to see curve improvement,” says Boston O&P clinician Hector Paez.

Most children and teens with scoliosis achieve greater than 50% correction of the primary curve when wearing the Boston Brace 3D according to the prescribed wear schedule. Here are some recent success stories we’ve experienced with the Boston Brace 3D: